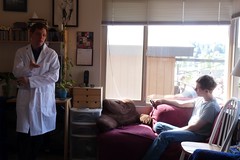 Photography again. I don't use people very often (as anyone who's checked out my stream knows). This was fun, though.

This one is inspired by Kelli Connel. Hers are incredible and I highly suggest checking them out. www.kelliconnell.com/

Humans are so bloody cool! And full of amazing!

Dancing is a fabulous thing. Expansive movement, taking up space. I love to dance, to seize the joy in the world. Dancing is a form of joy, after all.

This picture encapsulates this feeling of freedom. Of giving in to inner desires, and dancing with whatever is available. I'm not sure what the silver thing is, other than another piece of the world.

Everything is shiny when you're dancing.

I've posted the dancing in Antwerp station video before, and spread it as far and wide as I can. It remains my favorite youtube video, and it represents the best thing of the internet.

These guys did something similar in New Zealand, inspired by the above. Yay for wackiness.

While I was thinking about this application of the architectural terms of negative and positive space, and simultaneously reading JT’s blog about the clutter of the online media and the expectations of what we have to do to create a writing career and maintain it, along with marketing it, I had an abrupt-but-fine appreciation for the connotations of positive and negative spaces and how they impact our lives. With regard to the social media/marketing aspect, I think the online world—particularly Twitter and Facebook—create the illusion of positive space, a space to dwell. Only, there is no “space” there, there is no permanent peace or interaction with tangible walls and windows, living areas and social areas. It’s all hallways and moving, traffic and business with the veneer of being social, and at its most fundamental sociological construct, it’s in disharmony with our need to dwell, because in social media, we’re always moving through. Targeting something—more interaction, more movement, more recognition, more awareness (both of each other, of marketing needs and trends, of products, not necessarily just of our own products).

(The original article is mostly on writing, but this paragraph popped out at me.)

I now have a Wave account. It is awesome.

However, I have no invites. Apparently, you only get invites if you were invited by Google (rather than by friends). I'm certain this will change, and as I said, once it does I will announce it. (To twitter and to LJ.)

A small boy, perhaps ten or eleven, stood at the edge of the street peering back and forth along the street as if something might jump out and gobble him up. His cheeks were smeared with dirt from days, or weeks of accumulation. He scratched the back of his leg with a shoe that once was quite nice but now falling apart around his feet. They didn't provide much protection from either the rain-swept streets or the bitter cold nights. His jacket hung loose off his shoulders to nearly his knees, one of his hands completely lost in the sleeve. The other sleeve bunched up at his hand, where he held a small plastic container now devoid of peanut butter. A leather satchel hung over his shoulder held up well to the abuse the boy had put it through, obviously well crafted and dependable even through use. It held only two items: '<li> </li>' and '<li> </li>', distributed among the two pouches in the satchel.

He was one of a thousand small boys in the City, all lost, all clutching the last vestiges of their memories lest they, too, are stolen away.

Share a story filled with the awesomeness of the world.

I read this blogpost the other day about how textbooks are a massive ripoff.

He's a marketer, so maybe that makes sense for him. But I still have many of my textbooks, and I still collect ones I like. And I do use them for reference (at the oddest times).

So, LJ world, what do you think? Do you use your textbooks? Are they a massive rip-off?
Collapse